Epic From The Alps

The story of team BTH began in 2017, where 3 alpine newbies consisting of Wu Jieyou, Zhao Weijie and myself dreamed, trained and planned for our first foray into the French alps (and alpine climbing in general). We had our background mostly in sport climbing, with some experiences in trad climbing and ice climbing. We spent 3 weeks in the mountains and failed a bunch, but we also learnt many invaluable lessons that season. In 2018, a new member (Ryan) joined us and we are now a team of four. 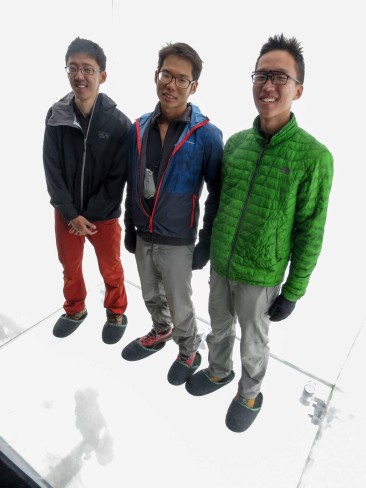 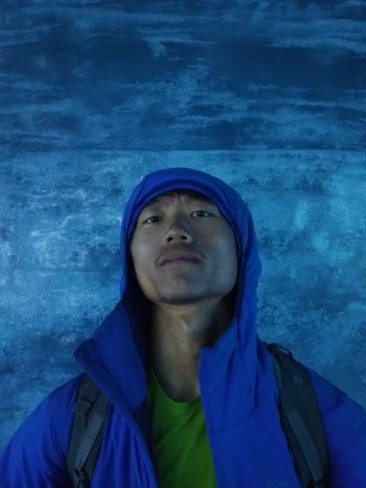 On the 13th of May 2018, Ryan and I set off for Chamonix Valley in search of adventure and challenges; we set our sights on the Aiguille du midi area because of its ease of access from the cable car to the glacier. Little did we know what’s about to unfold… 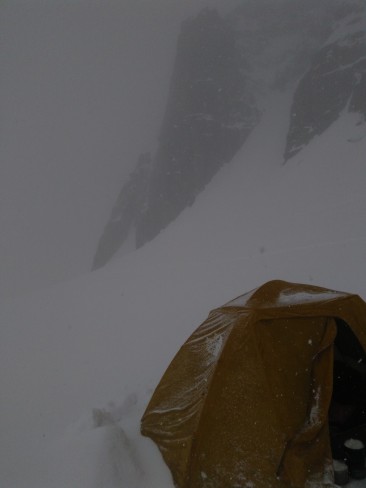 We set up camp beneath the south face of Aiguille du Midi, and soon weather turned a little nasty. 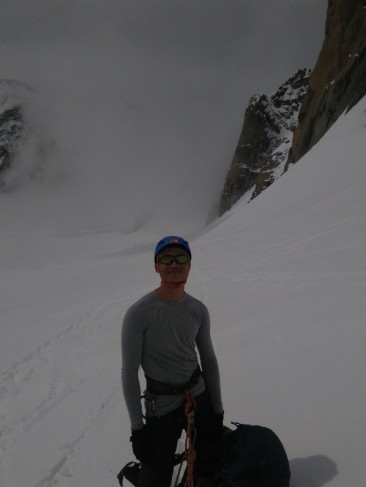 Happy face breathing in the crisp air of Chamonix

We set up camp beneath the south face of Aiguille du Midi, and soon weather turned a little nasty. At the same time, we found out that our new lighter wasn’t working at high altitude!! That means we couldn’t boil water to drink or use it to cook food- a terrible situation! We then decided that we had to head down tomorrow to get some other fire-starting device. That began 17 desperate hours of being dehydrated and tent-bound. 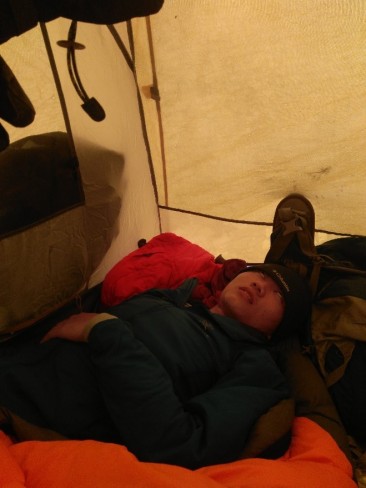 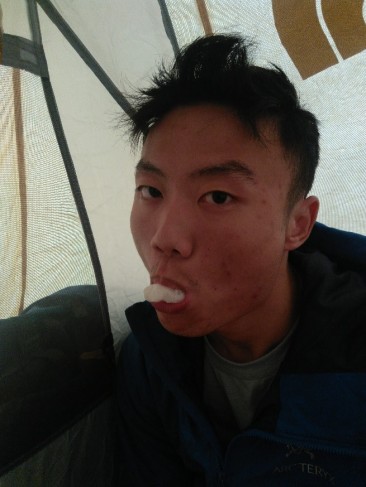 We woke up to great weather the next day and decided to make a dash up the Arete de la Laurence before headed down to the valley. The climbing was fantastic and the situation was superb, especially as there was basically nobody in our vicinity (we would later find out why…) 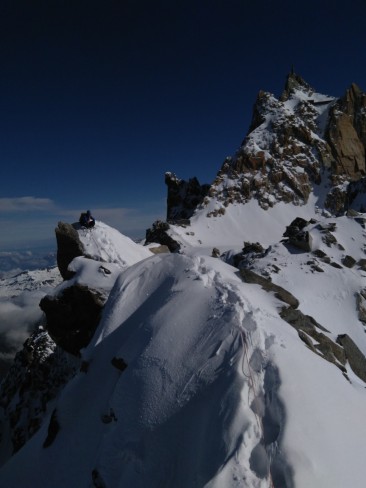 Climbing on a ridge 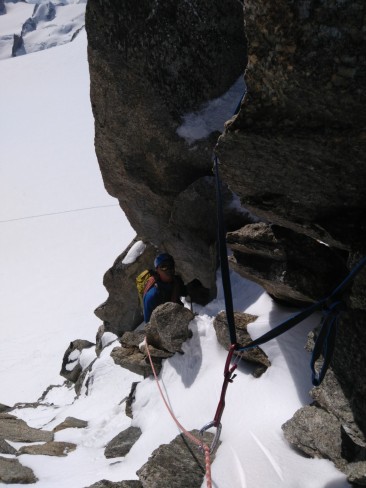 After the climb, we packed up our tents and gear and headed back up to the cable car station, only to be informed that it was closed indefinitely! Somehow by the kindness of the French we managed to get a helicopter ride down instead.

After this initial epic, we decided to stay away from the big mountains for awhile and climbed a couple of long routes in the valley instead, including Voie Princesses (300m) and the Northeast Arete Integrale of Aiguilette d’Argentiere (100m). 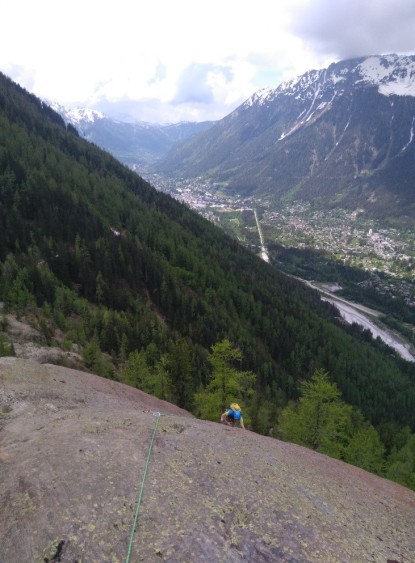 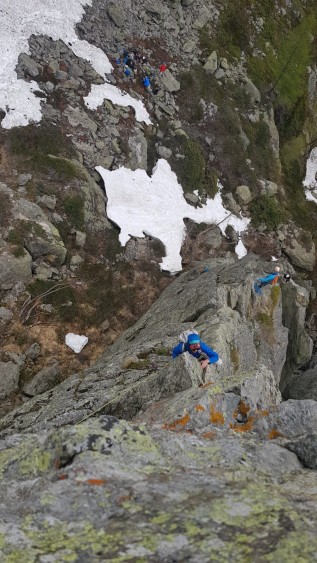 With a three-day weather window, we then decided to head for the historic route of Whymper Coulouir on the Aiguille Verte. However, we got lost and ended up bivying under the starry night sky. 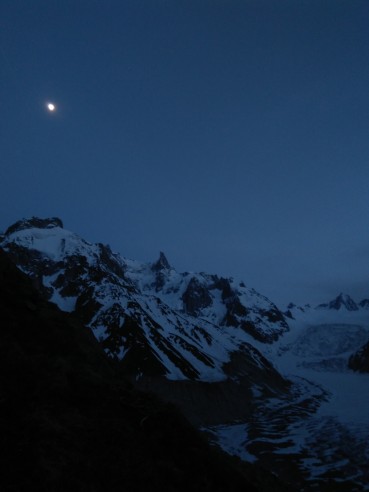 The view from our bivy 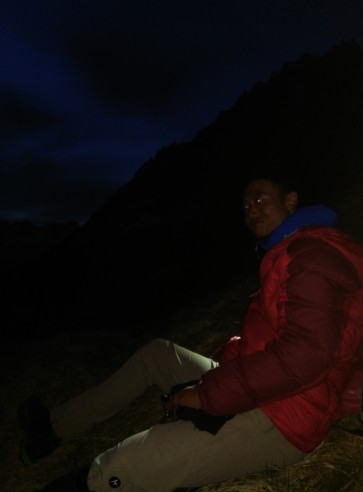 Ryan on his bed for the night 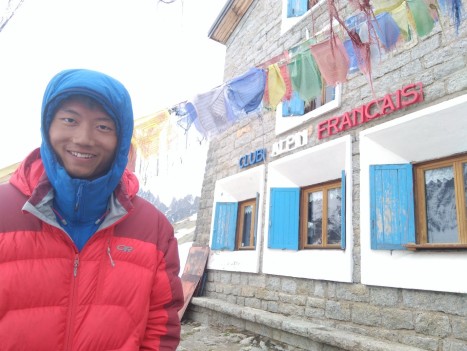 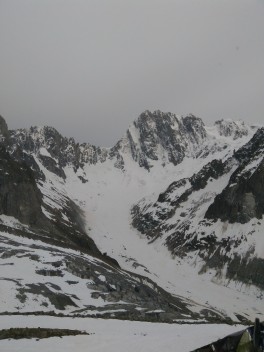 The next day we finally found our way to the hut and rested for the day. We headed off at midnight to attempt the route. We turned back 3 hours later because we were going too slowly in the deep snow to climb and descend the route safely. We headed down the same day.

Scary descend 1: Snow field on the side of slopes 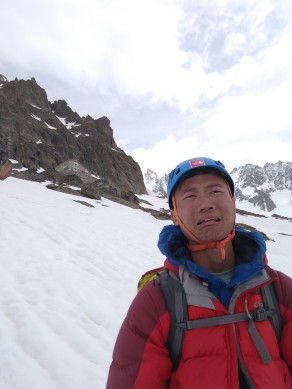 Sad Ryan, heading down and anticipating the scary descend 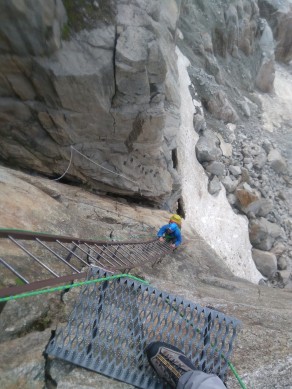 While it can’t be perceived in the picture, the ice actually goes up to 80 degrees! 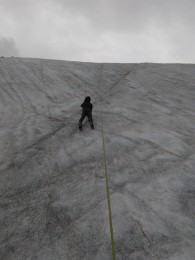 Same wall, from another angle

After a week of waiting and resting, the Aiguille du Midi cable car finally re-opened and we managed to climb 2 routes over the weekend. The first of which is the East face of Eperons des Cosmiques, which features some superb free climbing on coarse, crack-lined granite and physical aid climbing sections!

Got lost right off the ground on the first pitch! Made it on the right route though. 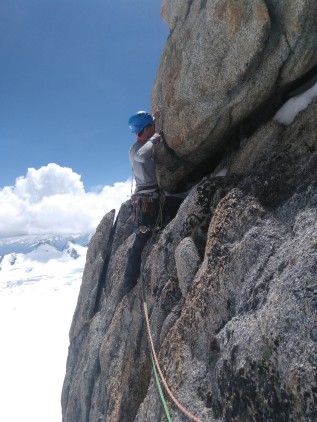 Aid climbing on the crux pitch of the route. It was tough!

After we ascended the route, we rappelled to the base of the climb. However, it took us 2 hours to retrieve our ropes off the last pitch and we missed our cable car down! Luckily, the cosmiques hut was nearby and we decided to head there for the night. Other than being 66 euros poorer, we were treated to the fantastic sunsets views.

The next day we headed off in the morning for the uber classic of Cosmiques arete, which brings us back to the Aiguille du Midi Station. The climbing was amenable and enjoyable, and we made it down to town in time for lunch!

The second crux, a long section of mixed ramp which was rather awkward!

Climbing onto the cable car station, looking like bad asses (which we are not) to the tourists! 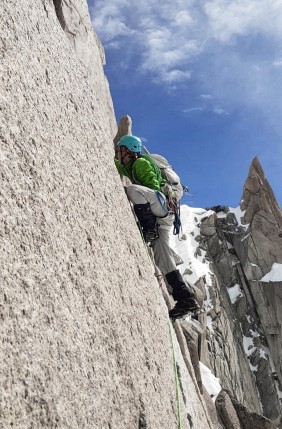 The first crux of the Cosmiques Arete 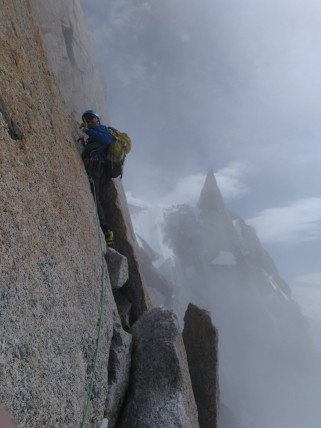 As we recuperated in the valley the next day and plotted our next big climb, we got the news that the cable car station was going to be shut down again! It was a week before we would be climbing again, this time joined by our third member Jie you (GU). We decided that the North north-east ridge of Aiguille de L’m would be a good acclimatisation climb for him, as it was at a relatively low altitude, coupled with a long hike in and superb crack climbing, which plays right to our strengths of being primarily rock climbers. It turned into a 22hour epic but we made it up and back down again, marching into the train station at 7am the next day. 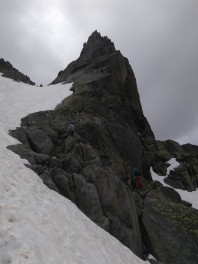 We gave Jie you the honour of leading the classic polished crack pitch of the route! 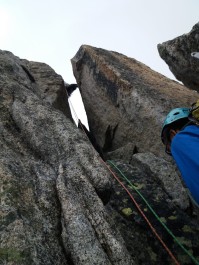 Another classic, this time on the tight chimney which was difficult to squeeze through because of our packs! 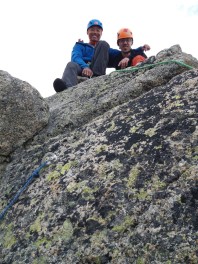 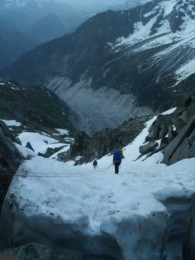 Rappelling off as daylight fades

It was good to see the sun again

After this climb, Wei Jie arrived, and we were finally at full strength! We headed over to the Torino hut in Italy, which is possibly the most accessible and well-equipped mountain hut I’ve ever seen. We decided to go for a short acclimatisation climb our first morning at petit flambeau and was immediately thwarted by a whiteout.

When the weather cleared up the next day, we headed to for the Aiguille Marbrees Traverse in a 2-team configuration with Wei Jie with GU, and Ryan with me. I had my best experience on this climb as we kept moving and the climbing was hard enough to keep us engaged but not hard enough to stop us. We made it back to the hut for lunch, after completing the traverse and even dashed up to the summit of Petit Flambeau just for fun! 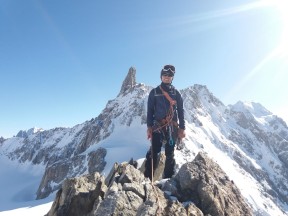 Wei Jie on the summit of Aiguille Marbrees, with ent du Geant in the background

The next day, Ryan and I decided to head for the Dent du Geant (Giant’s Tooth) while Wei Jie and GU took on the East face of Tour Ronde. We started off early and arrived at the base of the climb after a long slog which could be a climb in itself! Being punters, we didn’t find out the conditions of the face properly and were treated to mixed climbing in our rock shoes! Moreover, the dry sections of the wall (Burgener slabs) was fixed with thick ropes the width of one’s arm, so the climbing was pretty meh and we (as with all parties) tugged on the ropes to expedite our passage. 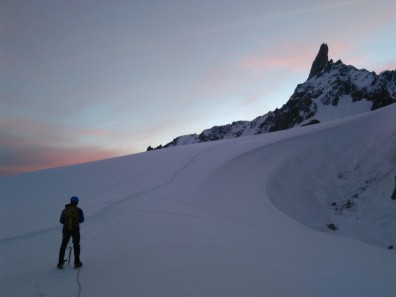 The colours of the skies were beautiful at dawn

The climb hasn’t even began yet…. 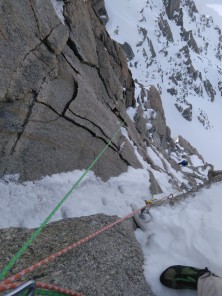 This was not fun

It was cold and while the climbing was not enjoyable, it was rather physical and we were pretty happy to be over with it.

The descend from the summit was a scary experience, with rappels being extremely high off the deck through over hanging sections. At one point I was left with 10m of rope with a weirdly rigged anchor in sight but not in reach as I was way too outward. Luckily, I spotted another abseil anchor 10 m to the left of it, and I had to abseil down to a ledge and climb over to the anchor, where one misstep would swing me out of the mountain. Luckily the climbing wasn’t too difficult and I fed the rope out smoothly as I went, and I managed to reach the anchor safely. After rappelling to the base, we had a short break and hustled down the mountain, downclimbing and butt-sliding our way down. When we got back to the hut, we found out that Wei Jie and GU had retreated from Tour Ronde due to the poor conditions on the face. We also found out that the climbers who stayed next door to us had not returned since the day before. They were later found dead at the bottom of Tour Ronde. It was a sobering reminder of how mortal we are and how dangerous the mountain environment is.

“Climb if you will, but remember that courage and strength are nought without prudence, and that a momentary negligence may destroy the happiness of a lifetime. Do nothing in haste; look well to each step; and from the beginning think what may be the end.” – Edward Whymper.

Ryan and I decided to recuperate in the hut the next day while GU and Wei Jie went up to climb at the Aiguille d’Entreves. We got worried for them as they didn’t return for lunch and were very happy when they finally made it back in the evening. Turns out there was a traffic jam on the route which delayed their progress. 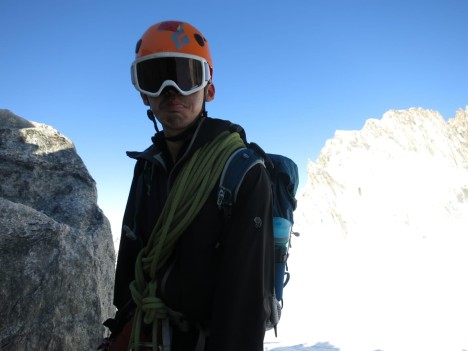 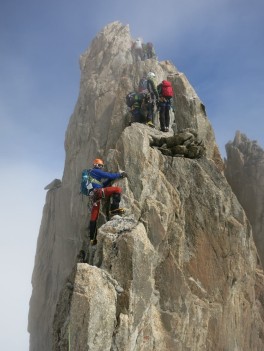 The next day, it was GU and Wei Jie’s turn for a rest day at the hut, while Ryan and I set our sights on the North face of Tour Ronde. As we approached the climb, however, we realised we may have started off too late as there were already multiple parties on the route. We then decided to turn to the Northwest face of Auiguille de Toule. It was a simple and straightforward climb and we managed to get back to the hut at 7am, just in time for a morning nap! 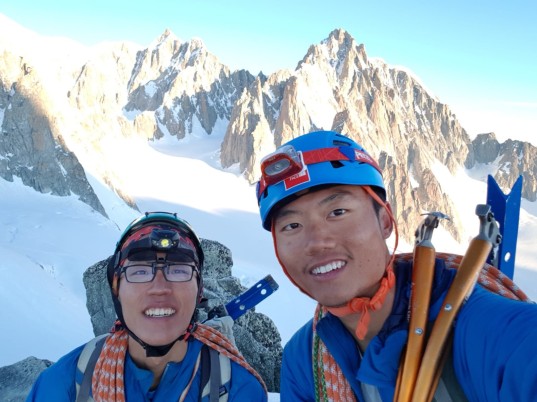 On our last day of climbing from the Torino hut, Wei Jie, Ryan and I headed for the Pyramid du Tacul, a satellite peak of the Mt Blanc du Tacul. The climbing was straightforward but the descend was problematic (notice a trend?), as we encountered situations where we had insufficient rope and we also had to downclimb several tricky sections to get off the mountain. We returned to a very worried GU at 8pm.

With the remaining time we had in Chamonix, Ryan and Wei Jie headed up to the Southeast ridge of Aiguille L‘index at the Aiguille Rouges. We had ascended the route during our time in Chamonix last year but it was Ryan’s dream route so it had to be done.

With this climb, our time at the Alps came to an end. All told, we totalled 12 routes during our stay there (with a couple of other failed attempts). While whatever we have done may seem badass, we do not profess to be bad ass alpinists pioneering new trends, nor do we wish to claim credit for anything; after all, we are just a few punters doing what we love and seeking to push our own perceived boundaries in the process.  Sure, we do hope that our actions may compel more people to engage with themselves and pursue their own passions like we had. But ultimately, we climb for our own satisfaction and fulfilment, and that alone is sufficient.