The most standard advice on how to get to know people when starting university is to get involved in a student club. I went to the fair at NUS and wanted to try a new sport. Though several clubs where open for beginners, I got the impression most of the clubs were for people who already knew the sport. However, the mountaineering group was very welcoming and said anyone could come to training, for free and with no commitments. When I went for the first training it was mainly because I kept failing to motivate myself to run in the heat and humidity, I did not imagine I would end up climbing a 5863 meter peak in Himalaya with them.

All credit to Kelvin for the gopro videos from the summit day. I thought my phone was dead and have no pictures and videos. Michael also made a video, much better, which is here, on the club’s website.

The trip to Naya Khang, a peak in the Langtang region of Nepal, was a technical mountaineering course, TMC. The trainings were only commitment free the first semester when I wasn’t going for the TMC in December. Once deciding to join the summer TMC I committed to attend 80% of trainings. We trained four times most weeks this semester, twice a week running and planks and things, Saturdays were for walking up and down the stairs of Singapore’s highest (haha) mountain with load and Mondays were “theory” which mainly meant climbing a rope with a jumar. It ended up being very time consuming, but it was also a lot of fun and definitely worth the time.

We borrowed almost all the equipment from the club for free. It was fancy stuff, ice axes, mountaineering boots and clothes, sleeping bags and more, so it’s a really nice concept. We left for Kathmandu right after exams and bought the remaining stuff there, wet wipes and trekking poles. Then we drove to Syabrubesi on the scariest road ever and started the adventure.

The scenery the first day, trees and the river. 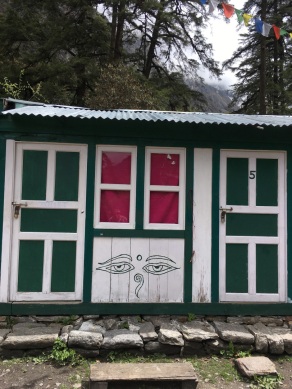 One of the tea houses had cute doors. 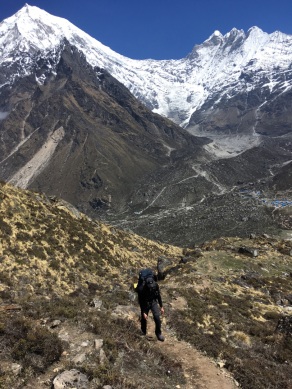 After a while we were seeing snowy peaks.
We spent 16 days in the mountains, excluding the bus ride and time in Kathmandu and Pokhara. The terrain changed a lot, from trees by the riverside in the beginning to only snow, ice and rock at higher base camp. First, we were trekking from village to village, then we slept in tents for 8 nights in three different camps, and finally we stayed in villages on the way back. We passed through Langtang village, the village destroyed by a landslide resulting from the 2015 earthquake. 243 people, more than half the population, were killed. It was tough to see it. The bright side was a new Langtang village built next to the sea of rocks, where we spent the night.

My favourite village was Kyanjin Gompa, where we spent the most time, climbed, hiked up the mountain behind to acclimatise and where we got the best food. The food was amazing the whole trip though.

After Kyanjin Gompa we went to lower base camp. We had to spend an extra night here to acclimatise. Higher base camp was next, where we did glacier training. We learnt ice climbing and other mountaineering techniques. This camp had an extra tent where we ate and could hang out, we played cards a lot and even watched a film. Some days later we left for advanced base camp. We tried to sleep when we arrived around 4pm, since we were woken up at 1am to get ready for the summit push. We climbed and climbed and climbed. And climbed. It was amazing once the sun got up, but it got cloudy fast and started snowing heavily. Even if there was no view due to the snow, reaching the top was very cool.

Climbing down turned out to be the hardest part. We were roped up (tied to each other), climbing backwards and since we were tired we kept falling and pulling each other down. We couldn’t take breaks since our guides were worried about avalanches. When we reached the base camp I was completely exhausted. Turned out, we weren’t staying there that night, but going to higher base camp, another 4 hour hike. It was around 9pm when the last of us reached that day. It was 2.30am when we left in the “morning”. I was so so tired.

It felt better the next morning. Not being in the snow was a relief, it meant we could wear trekking boots instead of double layer mountaineering boots. After breakfast we trekked down past lower base camp and back to Kyanjin Gompa. We stayed an extra night to learn crevasse rescue and the other remaining techniques before we trekked for two more days back to where we started. Being back and reconnected to the outside world was a relief, but it was also sad, it was the end of a really great adventure. I had such an amazing time.

When I first came for trainings I was by far the slowest and weakest, but I always felt very welcome. Joining this group was the best decision I made all year. I miss you guys. 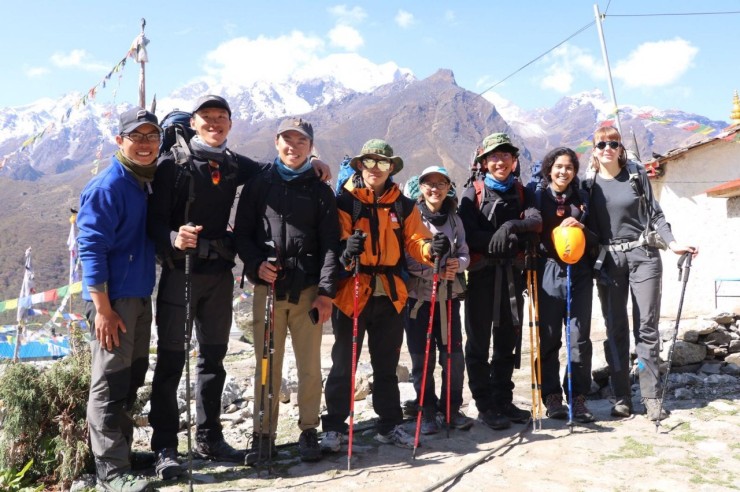