Dafeng peak (5,025m) of Mount Siguniang has been described as a beginner 5000m peak and the easiest of the mountain’s four majestic peaks, despite the comforting reviews for the peaks 2D1N climb, this mountain was not one to be underestimated.

As we left the bustling city of Chengdu and drove into the countryside, our group of 7 men and women were greeted by the breathtaking and towering peaks of the Qionglai Mountain Range, the highlight of which was a clear view of the range’s tallest peak, Mt Siguniang’s main peak (Yaomei Feng) standing tall at 6,250m. More people summited Mt Everest in 2018 than Yaomei Feng’s entire climbing history. In the magnificent summit’s shadow lied our much-anticipated destination, Dafeng Peak. While the climb would be relatively shorter and less challenging than its towering sister peak, Dafeng peak was to be no walk in the park. Nevertheless, Sichuan’s famous mountains were an awesome sight that could easily be mistaken for Himalayan mountains.

The start of our hike to Dafeng peak was a treat for eyes as we walked through the green, rolling hills surrounding by snow-capped peaks, lush pine forests and roaming wild yaks. These flat trails quickly turned into an uphill struggle over frozen rivers, dry rocks and gravel. Our group, starting off chatty and excited for the day ahead, but we were quickly exhausted and stopping often to catch our breath, the high altitude’s thinning air was no help as well. After a grueling day of hiking, we finally reached our base camp, a small cluster of around 5 stone huts. Despite the bare amenities, our guides and porters were able to cook up a delicious hotpot mixed with fresh vegetables and processed meat, a much-welcomed hot meal that helped us stay warm (barely) in the freezing weather. We soon retired early for the night for our early morning summit attempt.

Waking up well before the crack of dawn, we quickly ate a hastily prepared breakfast of hot porridge with pickled vegetables. The summit attempt was to complete the remaining 600m of vertical distance that separated us from the top of Dafeng, however, shrouded in darkness and with our lack of experience, the climb was terrifying to many of us. As we climbed, rock and gravel gave way to snow and ice. We put on our crampons, a first for most of the group, and carried on with our climb through the darkness.

Eventually, as the first rays of daylight peeped over the horizon, our goal became visible. The ‘shortest’ summit of the Siguniang mountain towered over us, yet our guides and strangely enthusiastic porters egged us on and kept us motivated. The effort, after a 5-hour uphill battle, finally paid off.

On the 18th of Dec at around 9am, the team summited Dafeng!

“If it wasn’t for the porters encouraging and dragging me up, I would have given up”

“I was terrified walking on the ice, I thought I would fall off the mountain”

After Dafeng, our team decided to have a little foray into ice climbing. The same guides who brought us up Dafeng also taught us ice climbing on the beautiful frozen water falls in the Shuang Qiao Valley. Here’s a few photos: 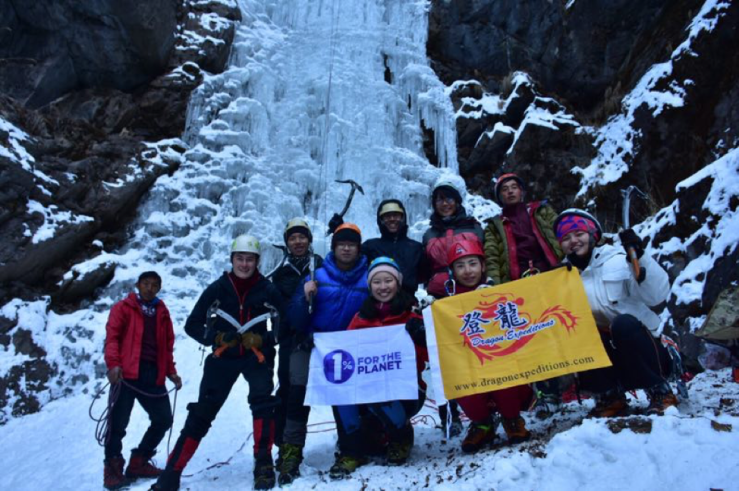 “To touch the sky, you just have to get that little bit closer.”
― Anthony T. Hincks