Since July 2004, members of the MIR3 team have been training for about 3-4 times a week, which includes long-distance runs, gym work and carrying a loaded pack up and down Bukit Timah Hill and HDB point-blocks. Besides physical training, members of the team were also involved in fund-raising, which saw them making telephone calls to companies for sponsorship. Valuable skills such as marketing and public relations skills were acquired along the way and the members also learnt about time management when they had to juggle training, expedition preparation, school work as well as their social life.

In December 2003, 6 members went on a 10-day Technical Mountaineering Course (TMC) in New Zealand where they learnt valuable skills on snow and ice, which will eventually prepare them for their final expedition in May 2004. During their TMC, they also summited a peak in the New Zealand Southern Alps, Mt Von Bulow (2,600m).

The official launch of the MIR3 Programme was held on 14th January 2004, after the MIR3 members returned from the Technical Mountaineering Course. It was held in the National University of Singapore and the Guest-of Honour was Dr Vivian Balakrishnan (Minister of State for National Development and Minister of Trade and Industry).

From January till April 2004, the team focused on physical training and when necessary, training was intensified to ensure that the members were at their peak when they leave for the expedition. Other issues include preparation for the expedition, fund-raising and publicity. During the time, the MIR3 team also put up various photo exhibitions in NUS as well as in public to increase and spread the awareness of mountaineering to the general public.

On 7 March 2004, members of the MIR3 team also put up a photo exhibition for Singapore Sports Council (SSC) during a carnival organised by SCWO (Singapore Council of Women’s Organisation) – A Fete on Waterloo: Celebrating International Women’s Day 2004. During the exhibition, some of the little known facts about women’s achievement in mountaineering were showcased and visitors to the carnival also had a chance to experience a taste of how climbing training is like in the stair-master challenge set up. 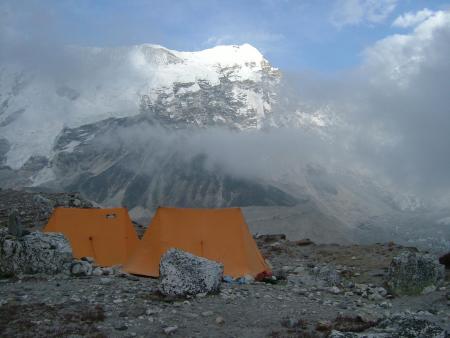 After about 9 months of hard work and preparation, the final team of 7 members left for Nepal on 28th April 2004. All 7 members successfully summited Island Peak at about 9am on 13th May 2004. And after the first successful team summit, two members further challenged themselves by attempting a second summit on two separate routes. Junior member Jane Lee ascended by the Southwest Route, all the way from Base Camp, and without using fixed ropes. Senior member Terence Teo went up by the more technically challenging North Route that is seldom attempted. He started from Base Camp with a 24kg pack and climbed alpine style. It was especially challenging because the route involved much technical climbing and manoeuvring across crevasses.

The programme was a success. One of the main objectives was to introduce mountaineering to new students and the Island Peak expedition had given them that rare opportunity to experience for themselves what high altitude mountaineering entails. All 7 students successfully reached the highest point of Island Peak without exposing themselves to imminent risk. We returned to Singapore on 27 May 2004 to the joy and jubilation of our family, friends and well-wishers. Once again, Make It Real has in the third year running helped realize the dreams of those who dare to dream.

The Make It Real programme will not end after this expedition. It is now into its fourth year, MIR4 and there is a current team of 9 students planning for a similar expedition to Nepal next year. Plans for similar outreach programmes are on the way, as we want to spread our skills and expertise to the other Singaporeans who are interested to learn. This is to fulfil a larger vision of having a growing mountaineering community in the heart of Singapore, and to increase the mountaineering profile in the region. This is not just beneficial to ourselves, but to the society and nation in future.

Although the Make It Real Programme has only been around for a few years, the programme is already seeing the results of the hard work put in by the earlier batches. The success of the previous expeditions has affirmed the students’ passion for mountaineering and many of them are looking forward to taking on bigger mountains in the future. In the NUS Centennial Everest Expedition in 2005, 4 out of the 6 climbers were from MIR. Following the success of MIR’s Island Peak Expedition, four female members of the team initiated the formation of the first Singapore Women’s Expedition to climb Everest in 2008. And in the process of preparation for Everest, the ladies would like to contribute back to MIR by incorporating the following MIR programmes under the wing of the Singapore Women’s Everest Team. As such, the core members of the Women’s Everest team, along with MIR alumni, would be helping in the training, planning and fund-raising of the MIR Programme.

Although grooming potential future mountaineers is one of the objectives, mountaineering as a sport bears many valuable life lessons (e.g. importance of goal setting, determination, resilience etc) relevant to our lives and MIR has always aimed to relate these lessons and provide inspirations to the public, to inspire people to reach out for their dreams.